Mind Read & Prediction Card Trick: How to Perform It 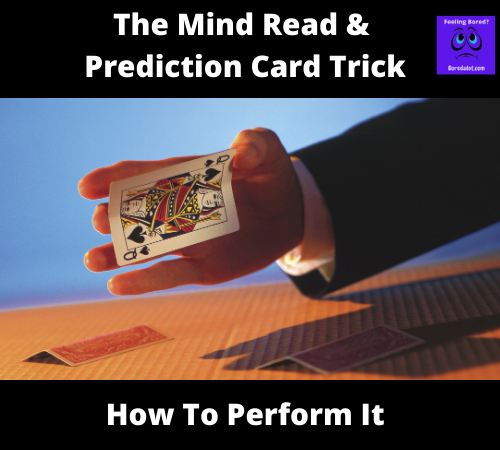 Have you ever wondered what it’s like to be David Copperfield, David Blaine, or Lennart Green? These professional magicians can pull off some amazing card tricks right before everyone’s eyes. Sometimes, you ponder how long it took them to practice and perfect those tricks—or if there’s real magic in these!

However, you’ll be glad to know that some of these magic tricks begin with simple decks of cards. All it takes is for you to study how they do it, practice it yourself, and soon impress your friends during a party. Fret not, as we’ve rounded up some steps for a relatively easy and simple card trick for beginners.

Here’s the mind-read-and-prediction card trick that will initially unleash the magician in you:

This card trick is in predicting chosen cards as if you can read minds. It is very easy to learn and perform, encourages spectators to interact, and leaves a fun revelation. Here’s how to pull this off:

First, you must prepare your deck of cards with red or light-colored card backs and a marker. The marker will be used to write numbers on each back.

At this point, it is time for you to perform the trick. Follow the steps below:

At this point, tell the spectator that you will read their mind. Here’s what to do:

In short, the trick is to have a spectator mentally pick a card, and you want to guess the number on its back. By following the steps above, you’ll be able to pull this off seamlessly!

So, there you have it! It looks like this card trick is straightforward and relatively easy, right? All it takes is to follow the steps outlined above, keep on practicing, and soon try doing them with your family or friends. Ultimately, this card trick is a great way to kill boredom and have some fun!

Have you wondered how to do card tricks? You’ve come to the right place! We’re your go-to digital platform whenever you’re bored, as we can refer you to random websites for free online games, trivia, quizzes, weird stuff, prank ideas, jokes, and other forms of entertainment. Explore our online platform and let us kill your boredom!