The Best Virtual Car Museums To View From Home 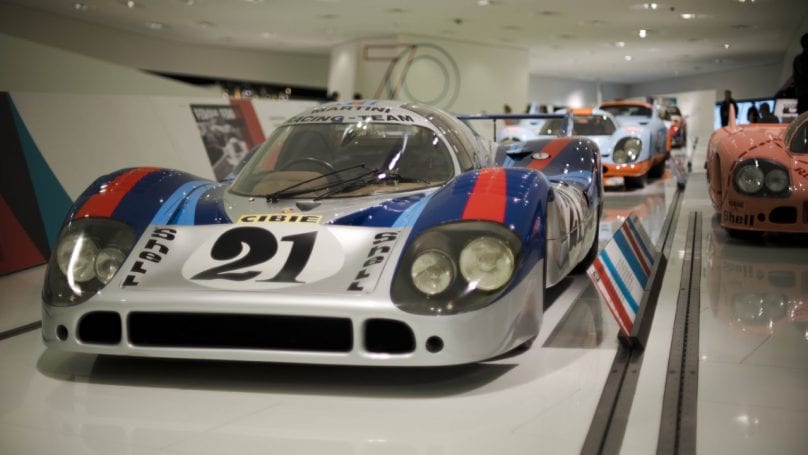 However, this guide will show you exactly what you have been missing in your lockdown lives, a good old fashioned virtual car museum. Below are some of the best in the business with a little description of what they do best. 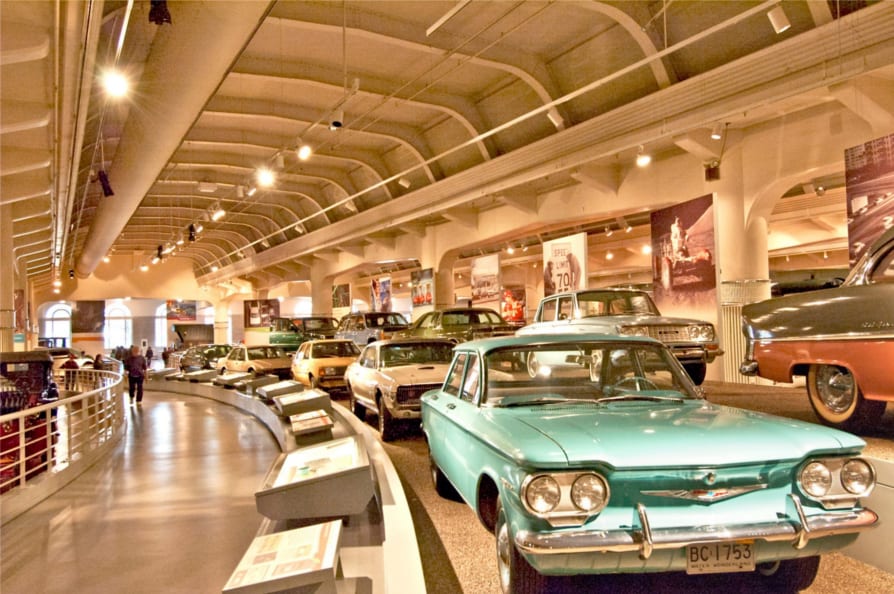 This is one of the most famous car museums in the whole world and for good reason. Henry Ford is one of the most influential inventors in American history and is the founder of, you guessed it, Ford Motor cars. Henry Ford was also a pioneer of other technologies common place today such as the assembly line. His legacy is great and his company has now swallowed up other large American car companies such as Cadillac and Chevrolet.

In normal times, the Henry Ford museum would be in a suburb of Detroit- home of manufacturing in the US. However, because of the circumstances, you and the millions of others of come to the museum every year can now view it online. Simply type into your search engine, “Henry Ford museum online” and it will come up.

On the website itself, you will find a number of different artefacts that all have their roots in iconic history and the work of the Ford Motor company. For example, one of the events that you can view in the online museum is the original bus that Rosa Parks led her protest on all the way back in 1955. For many, this was the act that sparked the American Civil Rights movement and started in motion changes that we still experience today.

You can also see Henry Ford’s first attempt at building a gasoline powered car. It was called the Quadricycle and looks very similar to a modern day quadbike. It is made out of the highest spec materials of the day namely: iron, leather and chains. This Quadricycle would have set you back just $200 and even had an ignition system designed by Henry Ford himself. The money raised by the sale if his Quadricycles would go on to fund the design and creation of his world famous Model T car. This car would revolutionise America and would truly start the American dream for many.

If this sounds interesting, then you can view these exhibits for free. There is no charge and the virtual visit is done entirely via Google Maps making the visit simple and easy to understand.

The Corvette Museum is another great online museum that you can try. Everyone knows Corvette as the classic American sports car, and since 1953 they have been making generations of sports cars. They are made by the larger company General Motors and have been built in the same facility in Bowling Green Kentucky since the 1980s. As the years have gone past, Corvette have upgraded their models to be faster, more comfortable and sleeker. The result is a timeline of Corvette’s going all the way back to a concept model at a 1953 car show.

If you are fan of the American sports car or just want to find something to do, then there are 80 models on display in their online museum. Much like the Henry Ford museum the admission is free and to find it you will need to do the following. Firstly, type “National Corvette Museum virtual tour” into your search engine. Then scroll down and find the result that is an article from the New Zealand Auto car magazine. Click on it and scroll down to where the article says “Click to view virtual tour”. When you click the link, you will be taken to a Google Maps page that is the start of the museum.

Once you are inside you can make your way freely through all of museum and you can see all the cars up close with amazing detail. When you first enter the museum, you will most likely see the admissions desk. If you make a 90 degree turn to your left, then you will see two rows of some of Corvettes latest models. If you want to you can view these before you begin your tour. Flanking these models are shops and cafes which you can take a look at as well. Sadly, you cannot purchase any virtual food or clothes, but you can find merchandise on the Corvette website that you can buy.

The tour starts just through the opening behind the admissions desk. You will be guided by the arrows on the floor and you can stop whenever you like. All of the informational text on the walls ad pictures can all be seen from Google Maps, so it will still feel like a classic museum visit.

Another iconic car company in McLaren have opened their virtual doors to visitors during the lockdown. McLaren is a British car company that was founded by Bruce McLaren in the 1960s, the founder was an ex racer and designer and the cars his company would later build would follow that same theme. He had an F1 team in 1965 that would really influence the way in which McLaren would design and build their road cars from then on.

However, in modern times, McLaren are known more for their super cars than their success on the race track. The McLaren F1 and the P1 became the first road legal cars made by the company and quickly grew in popularity. Since then they have made a wide range of cars: including a modern version of the F1, the 720S and the 620R. All of which have been heavily influenced by their racing heritage.

If you want to take a look at the inside of the technology centre, then simple type into your search engine “McLaren Technology Centre virtual tour”. The first result should be the McLaren website, which when clicked on will give you access to the tour via Google Maps completely free of charge.

As you first see the tour, you will be met by four red McLaren F1 cars, if you turn to your left then you will see four more McLaren cars. If you head down the corridor immediately in front of you will be faced with a very long trophy cabinet. These are all of the accolades that McLaren have won over the years ranging from F1 championships to car show prizes. Heading back the way you have come, you will glide past a huge number of different McLaren models some road legal some not. Many of these cars are from the early days of McLaren’s racing past.

While you are looking at the cars on the inside, make sure to look out of the windows to your left and take a look at the wonderful British countryside, you can even see a tractor working the fields.

Honda is a Japanese car company that is famous around the world. The Honda Technical Research Institute was founded by a man named Honda Soichiro in 1946, they produced combustion engines that was incorporated into the Honda Motor Company who began building motorcycles in the late 1940s. From there, their range has diversified and they now sell many hundreds of different types of cars and motorbikes in markets all across the world.

Once again, if you are interested in viewing the over 300 different models they have on display then simply type in “Honda Collection Hall virtual tour” on your search engine. The first result is the one that you are after and after you have clicked on that, it will bring up the tour.

This tour is not powered by Google Maps and instead by Hondas own 360-degree tour software. However, it is very simple to use and is actually more interactive than Google Maps. When you first load the website up you will be placed in the entrance way to the collection hall. You will be faced with some of Honda classic cars such as the RA272 and the Curtis Racer, both of which are interactive and you can click to see a short informational film about the history of that particular car or bike.

You will see a purple circle by the stairs that will continue the tour for you. By clicking on the arrow, you will be transported into a room full of Hondas production cars and motorbikes. From here you have a number of options available to you, you could go and see automobiles and power products to your left, you could go up the stairs again and see racing cars and motorbikes or you could continue on ahead and visit the motorcycles section. You can even go back the way you came and go down the stairs to the lobby although there are no exhibits this way and you will only see the cars you have already seen on the way in.

This is a great interactive option for everyone and will keep you interested for the full length of the tour regardless of whether you are a car enthusiast or not. 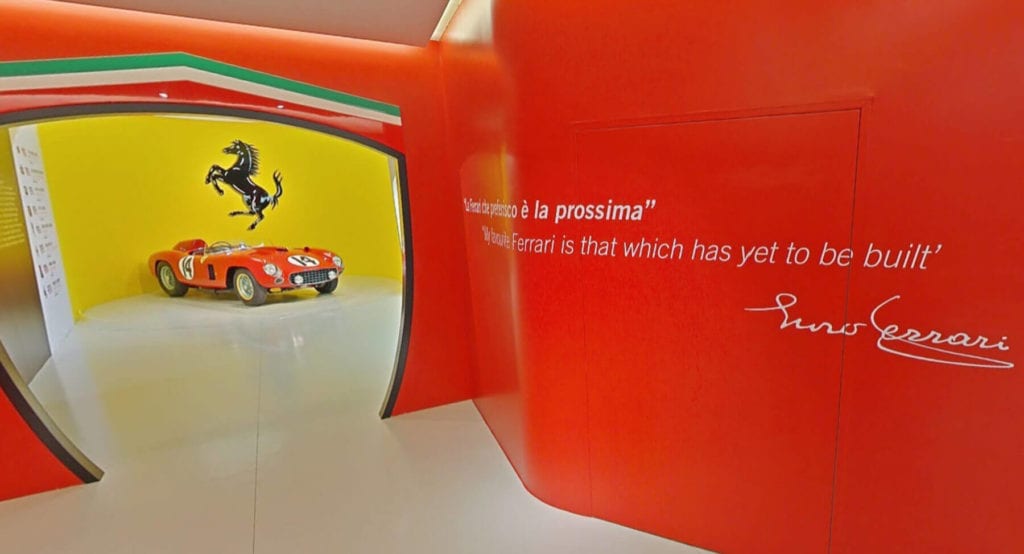 Ferrari are one of the most famous brands in the world, its history dates back to 1939 where an Italian man named Enzo Ferrari found the company as a race division of the larger Alfa Romeo. In 1940 the company built its first car, however, the actual inception of Ferrari as an auto manufacturer is recognised as 1947 as this was when Ferrari made its first Ferrari badged car.

Since then, Ferrari have built many hundreds of different cars from race cars like their F1 cars to road legal cars like the Enzo. Ferrari’s racing pedigree has been shown in such films as “Ford v Ferrari”- the tale of the 1966 Le Mans 24hr race. This is a gruelling race in which the best car manufacturers of the time would each put forward a car and drivers to try and win. In the end, Ford won that race with its Ford GT40 car.

If you want to experience the museum, then simply look up “Enzo Ferrari Museum virtual tour” and choose the option by hotshoesstudios. They have the Google Maps link embedded on their website and you can access the tour directly from there.

When you first enter the tour, you will be faced with one of the original classic Ferraris. Around the corner are a huge number of racing cars ranging from the very first model with a Ferrari badge on it all the way to the type of race car that will adorn the race tracks of today. Each car has a description of it and the accomplishments that were achieved by the different cars at different times in history, all you need to do to read these signs is to zoom in on Google Maps.

Carrying on with the tour you will turn left at the end of the room and enter another. On the wall to your left will be all of the drivers who have raced for Ferrari over the years starting from 1950 and going all the way up to present day.

Any one of these virtual car museums will always give you a great time and you might even learn something at the same time. But even if you do not, it will definitely prolong the boredom for a couple of hours and you may even start a new interest at the same time.