The Meat of the Matter: Can You Eat Pig Latin? 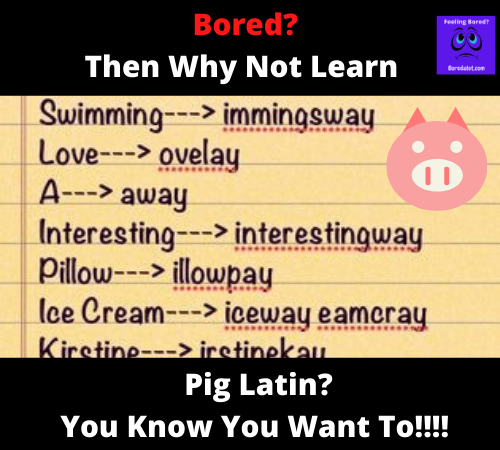 Language is such an amazing communication system. The ability to convey and solicit information and express thoughts about various subjects is something unique to humans alone. Human beings speak so many languages—what you understand may sound like gibberish to others. Speaking of gibberish, Pig Latin is viewed as complete nonsense by many, despite having originated in America.

What Is Pig Latin?

“Oink, oink” is most likely the first thing you think of when you hear the term Pig Latin. Contrary to what you may think, Pig Latin is not in any way related to pigs. It is, however, a language game invented by American children. This language is seen to be used way back, during William Shakespeare’s time.

What Do Pigs Have to Do with Anything?

Nonsensical wordplay during the Shakespearean age used to be called false Latin, which became “dog Latin” and later evolved to “dog Greek.” In 1844, Edgar Allan Poe used the term “pig Greek.” Even though these terms varied from each other, they’re all meant to signify “bad” Latin. This was used to amuse using puns—English roots affixed with Latin endings. Eventually, kids developed a secret code they called “hog-Latin.” The term “Pig Latin” appeared not long after.

Is Pig Latin a Real Language?

Pig Latin is a wordplay game; it is not recognized as a language, since it doesn’t meet the criteria linguists use to decide which qualifies as a language. A handful of Pig Latin words, such as ixnay and amscray (Nix and scram), are accepted as part of English slang, but nothing more.

This is widely considered a made-up language, just like back slang and textspeak, and fictional languages, like Dothraki in Game of Thrones, Klingon in Star Trek, and Sindarin in Lord of the Rings. Although not a natural language, Pig Latin can still be used to communicate with others.

How Do You Speak Pig Latin?

Pig Latin is English, with a bit of modification here and there. As long as you understand the English language and master the rules, you can speak it with ease! Don’t stress yourself out—this is simply a language game meant to be enjoyed! Follow the rules below so that you can become a Pig Latin expert:

1. Words Beginning with a Consonant

To translate these words, move the consonant from the beginning to the end of the word and add the suffix -ay after it. For example:

When translating multi-syllable words, simply add -ay after each syllable:

Some variants of Pig Latin are much simpler—you don’t need to break up the words by syllables and only have to place the first sound at the end of the word and add -ay. This is much simpler to understand and easier to decode; it’s up to you which version you use.

2. Words Beginning With a Vowel

You don’t need to move any letters with words that begin with a vowel. Unlike words beginning with consonants, all you have to do is add the suffix -yay to the end of the world.

Learning Pig Latin may not be as beneficial as learning Mandarin, which you could use in business, but it’s fun to use! Pig Latin is a fun way to communicate with friends and family when you don’t want others to understand your conversation. Not only is it an enjoyable thing to do when you’re bored, but you also get to use it whenever you want!

Are you bored out of your mind? Let Bored A Lot help you with that! We have thousands of boredom websites waiting for you to visit. We promise you that we have the most diverse set of links and fun things to do online for any type of person. Check out our list of fun sites today!