The Beginner's Guide to Boredom - A Deeper Perspective 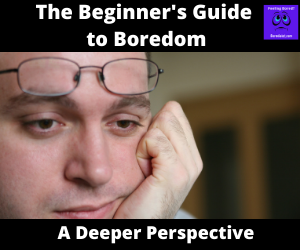 Boredom: Among all the experiences that humans will have throughout their lifetimes, this particular feeling often makes for the most troubling sensations.

Although most people may argue that boredom is just a “state of ungratefulness” because there are many things to do or enjoy, the feeling itself is real and can affect anyone. Sure, some people may experience it far more than others, but the message remains the same: it’s something that no one wants to experience!

What does it mean to be bored?

Often, boredom is seen as no more than a mundane, plain, and fairly simple concept. Yet, the reality is that it’s far more technical than most people expect.

Generally, the most common and fitting way to describe the experience (according to western culture, at least) is that it’s the feeling of having nothing to do. On a deeper level, it can even be defined as an unpleasant or undesirable emotional state where one feels a pervasive lack of interest, resulting in other experiences, such as difficulty concentrating.

From a referential standpoint, experts, behavioral researchers, and psychologists believe that being bored stems from the correspondence that one’s mind has in relation to the French word “ennui.” According to social historian Elizabeth S. Goodstein, boredom is rooted in the ennui, an existential perception of life’s futility that comes as a consequence of unfulfilled aspirations.

The universality of boredom

Given that billions of people in the world experience boredom at least multiple times in a day, it’s likely a universal experience that is deeply rooted in the fibers of humanity. In fact, it is quite rare to see or witness someone not experience or suffer from being bored at least a handful of times in their lives.

According to “Bored In the USA: Experience Sampling and Boredom in Everyday Life,” existing survey estimates show that anywhere between 30 percent and 90 percent of American adults experience boredom at some point in their daily lives, as do 91 percent to 98 percent of youth (Chin et al., 2017).

From a face value perspective, boredom can seem relatively simplistic because of how common and straightforward it is as a feeling, yet many fail to realize that it can snowball into bigger issues!

Boredom is distinguished and remarked by Kierkegaard as “the root of all evil” because it is predictive of loneliness, sadness, worry, and anger (which are linked to cabin fever). When such an experience isn’t controlled or moderated, it can become a motivating force of destructive habits, such as drug addiction, compulsive gambling, and alcoholism!

The key to beating boredom as effectively as possible for a lifetime of fulfillment lies in the ability to determine what causes the experience in the first place. If you want to feel more engaged with life, here are a few common causes of why you might feel bored to take note of:

For most humans, the feeling of boredom is one of the most dangerous, yet unassuming experiences that can lead to a host of problems down the line if not remedied correctly. Thankfully, keeping this guide in mind and being well-aware of what you’ll need to handle in the long run makes it far easier to keep stagnancy at bay!

Are you bored? Cure your boredom easily with Bored A Lot, your valuable resource for weird websites! We can provide you with the gift of endless fun during the holiday season. Browse through our website today, and make sure that you are genuinely having fun!