Is It Possible to Fold a Piece of Paper More Than 7 Times? 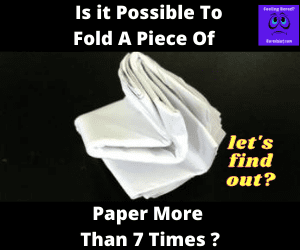 If you are looking for things to do when you’re bored, try to do something different. Stop spending hours scrolling down your Instagram feed and reading the latest celebrity gossip. It’s time to get your brain working and your muscles working! If you aren’t in the mood for something too physically taxing, though, why not try origami?

Origami—the art of paper folding—allows you to make so many shapes out of paper, and a quick Google search will show you instructions for thousands of projects. Paper folding also carries with it folk wisdom.

One of the pervasive notions about paper folding is that you can only fold a piece of paper in half up to seven times. Ever wondered how this came to be and whether it can be proven just a myth?

Try it right now—get a sheet of paper, preferably square, and fold it in half as many times as possible.

Is there really a limit?

Strictly speaking, no. You can fold a piece of paper in half more than seven times, and it has been accomplished by many people all over the world. The vital difference, though, was that these people succeeded in folding more than seven times because of their paper’s size.

People who succeed often have larger sheets of paper than the leaves of paper you have in a standard school notebook. They were not trying origami to fend off boredom. For them, it’s about beating a world record.

One such person, Britney Gallivan from California, proved that it is incorrect to think that you cannot fold paper more than seven times. She managed to fold a piece of paper 12 times in January 2002. She accomplished this because her “piece” of paper was bathroom tissue, measuring about 1.2 kilometers long.

Gallivan certainly is a record holder of some sort, but there was more to her achievement than a quirky fact about her to pass down to relatives. Her experiment helped her develop a formula for the maximum number of times you can fold a piece of paper in one direction.

What makes folding paper so tough?

Origami becomes trickier every time more you fold the paper because of the thickness. Though it does not seem like a big deal, you double the paper’s width when you fold it in half. Thus, a 0.1 mm thick sheet of paper becomes 0.2 mm. If you keep folding, the thickness increases exponentially.

Furthermore, the paper’s height increases with each fold. Folding the same paper seven times yields a piece as thick as a stack of more than 120 sheets. With each fold, you also have a shorter piece. Theoretically, if you folded a piece of paper more than 100 times, you could have a paper thicker than the universe!

Paper folding is an excellent and calming way to pass the time. There are many shapes you can create out of paper, and there are countless origami guides online. Folding a piece of writing more than seven times, though, needs a sheet of paper larger than your usual origami sheets!

Search Bored a Lot for websites, games, and things to do when you’re bored. We have thousands of wonderfully weird and funny sites to help you while away the hours. Start browsing to see more!