How Yoda-Speak Can Help You Appreciate Shakespeare: A Guide 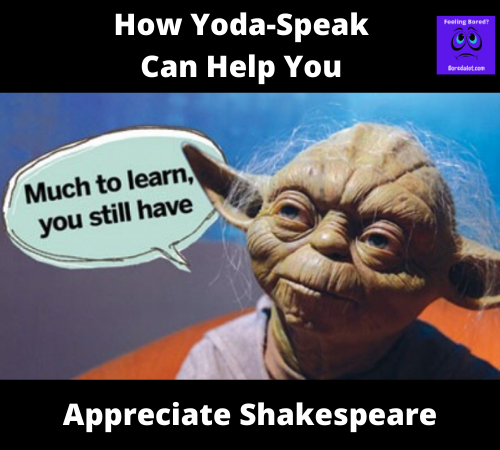 Decoding Yoda’s sentences and emulating his speech is one of the most recent challenges among modern-day speakers. It’s because this great Jedi master is known for talking in riddle-like statements. It may seem puzzling to interpret, but this may be the best thing that has ever happened to Shakespeare. For your guidance, use this article as your guide to utilizing Yoda-speak for your next English homework.

The English language uses the subject-verb-object as the most common word order, meaning adjectives come before nouns, adverbs go after verbs, and prepositional phrases follow the word they describe. Here are some examples:

What makes Yoda-speak sound confusing is it uses the literary device called syntax inversion, which predates Shakespeare. To make it easier for you to understand, here is a common inversion in the King James Version of the Bible: “Naked came I out of my mother’s womb, and naked shall I return thither.”

Since Yoda is characterized as an ancient Jedi master, the use of syntax inversion in his dialogue reinforces his status and superior wisdom. It makes his lines stand out from all the other characters.

How Can Yoda-Speak Help Me Understand Shakespeare?

Yoda-speak and Shakespeare, along with other poems and other stylized forms, have one thing in common: they sound syntactically offbeat. Like Shakespeare, Yoda plays around with word order in sentences. By understanding the typical play around adverbs, verbs, adjectives, phrases, and complements, you can appreciate Shakespeare’s works and other literary pieces better.

For your reference, you can try the Yoda-talk generator to understand better how Yoda speaks. Here are also some examples of inverted syntax from Shakespeare’s Macbeth:

What Are the Basics of Yoda-Speak?

Another method to master Yoda-speak is to bring words from the end to the front. This approach of bringing a latter part of the sentence, like a noun or prepositional phrase, to the beginning is called fronting. It aims to put key information at the beginning of the sentence and then place perfunctory bits in the end.

Understanding Yoda-speak all boils down to recognizing speech patterns. Now that you know how it uses inverted syntax, you can point out the parallels between it and the written patterns in Shakespeare’s works. As a result, you can better appreciate them and other literary pieces.

If you want to use a fun Yoda-speak generator, you can try one from Bored A Lot. We also have a list of different fun, random, or weird websites to try if you are bored. Explore our comprehensive web page resource today!