Growing Bored of Your Sex Life ? These Positions Can Help You 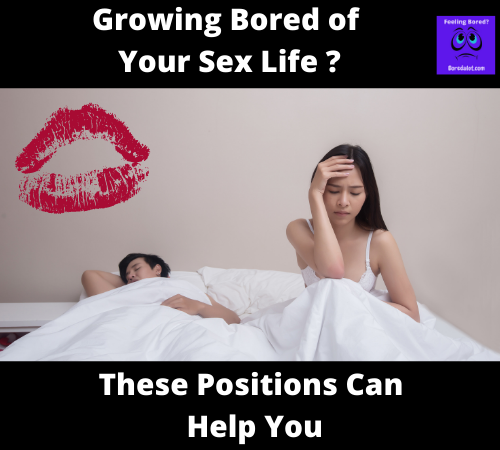 All right, now that we’ve gotten your attention, let’s talk about it.

Whether you like to call it the “hanky-panky,” “birds and the bees,” or “practice for starting a family,” sex is an exciting part of our lives with an impact larger than many expect. With a feeling unlike any other and the ability to tap into an entirely new dimension of the dynamic within human relationships, doing it is as unique as it is exhilarating.

However, there’s one main flaw with having sex that many people struggle with: It can be easy to get bored.

The problem of boredom

Whether you’ve been in a long-term relationship or are an avid participant in one-night-stands, you’re likely familiar with what it feels like to be bored when you have sex. After some time, the idea of simply flopping above or under your partner, getting frisky until you both climax, and rolling over for some cuddling won’t feel as exciting as it used to be, which is a dilemma in itself.

Although there are many different reasons one can get bored of having sex, the most prominent reason is that the repetition of positions just gets unbearable to a certain extent. Sure, positions like missionary and doggy style are great for putting the “love” in lovemaking, but there’s a certain point where things aren’t as exciting anymore once you’ve stuck in the same movement repeatedly.

Getting bored with your sex life? Here are some positions to try

At this point, you’re probably feeling a bit of conflict because you can’t really understand why you’re getting bored with your sex life (even if you’re dying to have some fun). Fortunately, catering to your libido isn’t as drastic or complicated as it may seem because trying these positions out can be of great help:

As a great and hassle-free way to spice things up in the bedroom, the flatiron is a great take on the classic doggy style position, but with added benefits in the mix.

Compared to the reliable position of doing it from behind, this position switches things up by having the girl belly down with a pillow or two under her hips. From here, the guy comes from behind and follows the same movement as he would with during doggy style. However, the difference is that the reach is deeper, everything feels tighter, and the g-spot gets hit better!

In its very essence, mind-blowing sex is an experience that’s best described as a two-way street. However, many couples don’t realize that another great way to give and receive is with a good and old-fashioned 69.

The one thing that most people don’t realize about this position is that it’s more than simply plopping on someone’s face or having it done the other way around—it’s a blank canvas for so much more. If you want to spice things up after you’ve got the part out of the way, you can make tweaks here and there like introducing sex toys in the mix or being a bit rougher so that both of you can enjoy!

Compared to a regular straddle, the Lotus makes things even hotter and heavier by switching up a lying position for a mutual upright sitting position where the girl is on top. Once you and your partner are locked in, and you’re deep inside of them (or they’re inside of you), rely on rocking back and forth for a more flow-like movement with maximum stimulation.

The one thing that makes the Lotus such a unique position to try when you get bored of your sex life is that it’s the most passionate of the bunch. By the time things get hotter and heavier, you can up the ante by locking eyes deeply and having your partner cross their legs (or the other way around if you’re doing the riding) for a mind-blowing climax!

Admittedly, it can be quite easy to get bored when you try to spice up your sex life because doing the same thing repeatedly makes feeling mundane even more intense over time. Thankfully, trying the three positions mentioned above will help you feel more excited about getting in bed and having intimate moments with your partner by bringing something new into the mix!

Are you bored? Cure your boredom easily with Bored A Lot, your valuable resource for weird websites! We can provide you with the gift of endless fun during the holiday season. Browse through our website today, and make sure that you are genuinely having fun!