Breaking Down Yoda's Syntax and Unusual Way of Speaking 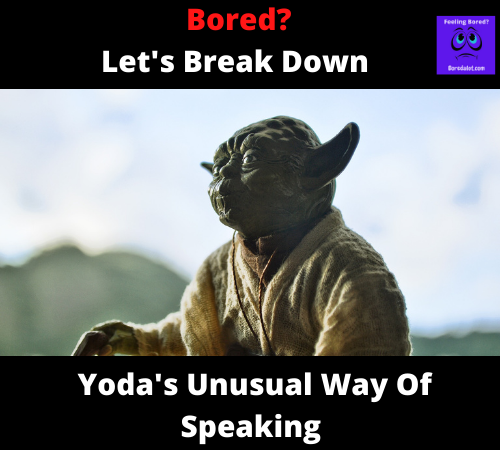 You’re reading this article because you probably binged a bunch of Star Wars movies, and you find Yoda’s way of speaking quite curious. Because of that, perhaps you want to talk like Yoda as well. Thanks to Yoda-Speak generators, you’ll be able to talk like Yoda and sound like the legendary master himself.

Yoda has a narrative way of speaking, and to a native English speaker, the way he constructs his sentence is almost riddle-like, which ultimately adds to his complexity. But what really is going on linguistically?

If you’re equally as curious as we are about how Yoda speaks, keep reading. In this article, we’ll find out what goes on in Yoda’s syntax and why he speaks the way he does. Let’s get to it!

However, for Yoda, his sentence construction is quite whimsical because his syntax is object-subject-verb. So, his sentence would be The lightsaber, Yoda held.

Geoff Pullum, a linguistics professor at the University of Edinburgh, says that Yoda’s sentence construction is a brilliant way for him to seem more alien and unique. For some, they may need to sit down a minute to figure out what Yoda truly means when he says, “Much to learn, you still have” when in fact, it’s simply “You still have much to learn.”

But did you know, Yoda isn’t the only one following the object-subject-verb construction. There are actually areas in the Amazonas in Brazil that follow the same sentence construction but in a South American Indian language called Nadëb. Isn’t that interesting?

Yoda and His Syntax Inconsistencies

When you’ve watched Star Wars a bunch of times, and you’re aware of most of the lines in the movies, you’ll probably be able to spot the few inconsistencies of Yoda’s language. Although Yoda prefers his object-subject-verb sentence construction, there are times when he jumps to the good ol’ subject-verb-object construction.

Because of Yoda’s inconsistent linguistic syntax, this has made more people puzzled about his syntax and would require more data to fully analyze and understand how Yoda speaks. Instead, most have resorted to using Yoda-Speak generators to come up with their Yoda-like sentences.

Have you ever tried translating Yoda’s Estonian sentences into English? It’s even more confusing! This is why the users in a subreddit are going crazy about the translations.

A commenter said that grammatically, it’s correct in Estonian. However, the way Yoda speaks makes it seem like he’s stressing the object phrase and turns it into his sentences’ main point, giving his speech an extraordinary quality.

In Czech translations, however, if the usual sentence construction is object-subject-verb, in Czech, Yoda speaks in subject-object-verb, much like in the Japanese language.

Appreciate the Uniqueness of Yoda’s Unusual Way of Speaking

We’re all still trying to figure out and analyze the way this legendary Jedi Master speaks. But the best way to truly appreciate his syntax is by abandoning your grammatical senses and absorbing his whimsical and mystical form of speaking. Besides, the way he speaks sounds strangely more profound and impactful, right?

And since we’re still unsure how to construct sentences like Yoda, we can always get help from Yoda-Speak generators to produce day-to-day conversations into Yoda-like sentences. Seek advice from us, you must!

If you’re bored out of your mind, Bored A Lot is here for you. We have many crazy and funny websites, Yoda-Speak generators, and fantastic games to cure your boredom. Kill your boredom with us now!