Are You Bored at Home? Try Learning Morse Code 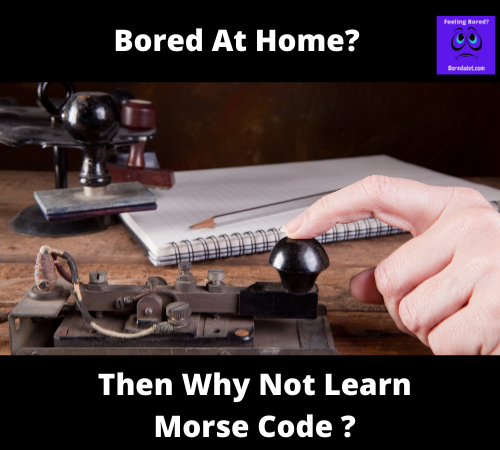 Are you on the hunt for things to do at home when you’re bored? If aimless scrolling through your social media accounts has become too repetitive, liven up your daily routine and exercise your brain by learning Morse code.

Engaging your mind in something entirely different from your daily routine is actually highly beneficial, not just to combat everyday boredom but also to improve brain function, too! Learning a new language enhances concentration, memory recall, and attention to detail—and there’s nowhere better to start than by learning Morse code.

So why should Morse code be your new activity of choice? Is it even being used in the 21st century? Let’s break it down.

Samuel Morse invented the electric telegraph in 1832 and developed a standard communication code in 1838. The first Morse code message traveled from Washington, DC, to Baltimore in 1844. It was the first time in human history that complex thoughts were sent and received instantaneously.

Morse constructed his code based on the frequency of use of every letter in the alphabet. The letter E is signified by a single “dot.” The letter Z, on the other hand, uses “dot-dot-dot (pause) dot.”

International Morse Code was then used in World War II and during the Vietnam and Korean wars. The shipping industry continued to use Morse code for ship-to-ship and ship-to-shore communications until the 1990s.

How Morse Code Is Used in the 21st Century

Nearly 200 years later, many more people have invented and developed means of instant communication—but you may be surprised to learn that people are still using Morse code to this day! Morse code has remained fundamentally the same and still helps pilots, radio operators, even Boy Scouts in their outdoor activities.

In aviation, navigation stations transmit their identification letters in Morse code on their radio frequency. This informs pilots of the station’s availability and serviceability. Some modern navigation receivers automatically translate Morse code into the corresponding letters, so pilots need not have the entire alphabet memorized!

US Navy warships have used signal lamps to exchange Morse code messages for nearly 150 years. Personnel still use it today to communicate while maintaining radio silence.

How Do I Learn Morse Code?

You can approach Morse code much like the way a child learns to read and write. You can start familiarizing yourself with the symbols in written and spoken form. As you learn the symbols, you will then be able to begin forming words and simple sentences—all it takes is a bit of practice.

There are many resources online if you want to listen to how Morse code symbols are sounded out. There are also online apps that will help you practice and use Morse code every day.

There are many ways to turn the feeling of boredom into productive activities. One thing you can do to stimulate your mind is to give yourself something new to look forward to every day! Learning an old, static language like Morse code is a fun challenge that will keep you occupied for a long time to come.

Do you still need more ideas for things to do at home when you’re bored? Bored A Lot is here for you. We have all the interesting facts, online games, recipes, trivia, and useless websites you need to make your day much more enjoyable. Bookmark our site now!