10 Random Trivia to Help You Avoid Getting Bored 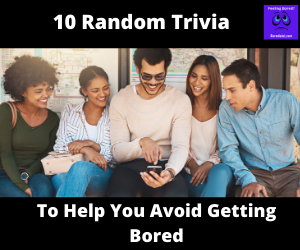 Have you run out of things to do at home and are now looking for something fun to read or do online? The internet is a huge place, and you are bound to find something that will suit your interests—as long as you know where to look. Once you find the right pace, it is all too easy to fall into the rabbit hole!

To help you start your search, here are some fun facts that you may not have known about. These facts cover a broad range of topics—from the human body to sports, and even sporting and space events!

The Eagle’s stadium once had a courtroom

The Eagles’ stadium once had a courtroom and jail. This was designed to detain any fans that were considerably annoying to deal with. This was a great way to help maintain peace, especially because there were fans that were so rowdy they affected the games.

Only one human organ can regenerate naturally

The liver is known to be the human body’s sole organ that could supposedly regenerate on its own. It is explained by the researcher Richard Bowen that the liver can regenerate after an injury and adjust to a size that is most suitable to the body.

The size of your liver could change daily

Ever wondered about what made bodies weird and special? It’s no surprise that a group of Swiss researchers found out that liver cells in mice could normally enlarge and tighten for up to 40 percent!

The astronaut that is allergic to the moon

In the Apollo 17 mission, astronaut Harrison Schmitt found out that he was severely allergic to moon dust—which was considered to be completely out of this world. What made this overtly strange was that there had been no prior signs of anyone to have ever had an allergic reaction to moon dust.

Someone almost killed Winston Churchill when he visited New York

In December of 1931, Winston Churchill was hit by a car as he was crossing a street. His experience was said to be something similar to feeling a massive shock to the forehead and thighs, where he could feel a considerable amount of pain affecting his lower body.

Women are commonly known to wear makeup—however, one of the very first people to have worn makeup was Vikings! Despite their gender (and their “macho” image on popular media), Vikings were one of the only people who have adorned their faces with makeup in order to appear younger and more attractive.

There is only one jail in Liechtenstein

In Europe, there is a place between Austria and Switzerland named Liechtenstein. What makes this place peculiar is that it only has a single prison to contain all of the country’s inmates. Its only prison usually accommodates about 10 to 20 people!

In the year 1923, there was a man named Frank Hayes who was considered to be the proud winner of a race in Belmont Park, New York. What made this victory peculiar was that the man had died in the middle of the race due to a sudden heart attack!

A barber was once threatened for selling cut hair

Neil Armstrong, the first man to walk on the moon, became a victim of hair selling. He threatened to sue his barber when he found out that the barber in question was selling Neil’s hair for $38,611! What would you have done if you found out someone was selling your hair?

There is so much about this world that you have yet to learn! If these little bits of trivia are interesting to you, rest assured that you’re only scratching the surface. Ever since the world began, there have been so many weird and wonderful happenings as a result of human life.

Bored A Lot is a website full of interesting facts, online games, funny memes, and more. If you are looking for a random website with plenty of free online games and other features to help you pass the time, this is the place to be! Head over to our website now and never be bored again!